Before I was ill, I took my health for granted. I was a vegan. I ate only organic. I avoided additives and preservatives and drank eight cups of water a day. I ate mostly raw mono meals, with hardly any salt or sugar. I compacted all the health dos and don’ts I had read or heard about into a very rigid lifestyle that centered on maintaining a “clean body.”

I should’ve appreciated that my body never hurt and that I rarely got sick or needed to visit a doctor. Being healthy was like having electricity ― it was a luxury that I thought I would never be without. I honestly could not have imagined the nightmare that was waiting for me.

I have been sick now for over two years. On the journey to a diagnosis, I heard it all ― pancreatitis, multiple sclerosis, rheumatoid arthritis, diabetes. Even cancer was mentioned as a possibility. I have dealt with severe fatigue, recurring sore throats, low-grade fevers, body aches and chills, nausea, food intolerances, digestive distress, skin rashes, breakouts, irregular periods, brutal unworldly PMS and anxiety. Simple tasks like cleaning, doing laundry, washing dishes, sometimes even just getting dressed have been exhausting.

Finally, I tested positive for the Epstein-Barr virus, or mono. At first I was relieved to hear such a harmless-sounding diagnosis, but two years later, it seems the joke is on me.

Long-term mononucleosis, or chronic EBV, is linked to cancers and a slew of other autoimmune diseases. Some people catch the lesser EBV virus and dispel it within two to four weeks. I happen to be unlucky and developed a stronger strain. It’s rare, and there is no medicine for chronic EBV.

Doctors have given me advice similar to what they would say if I had the flu. Rest, avoid stress, eat good food, drink fluids and “listen to your body.” They have warned me it could take months, maybe even years, for the virus to leave my system and for my body to heal. I have good days, when I am a ball of energy, and bad days, when all I want to do is rest.

I think understanding it is irrelevant at this point. I might never know why. What is important is recovering, both physically and mentally.

The first thing that went when I got sick was my digestive system. I developed viral irritable bowel syndrome (IBS) and small intestinal bacterial overgrowth (SIBO) from the virus. Eating almost anything would cause crippling gas to build up in my lower intestines, as well as vomiting, diarrhea and constipation. I struggled to find foods I could tolerate.

I quickly went from a healthy 5 feet and 110 pounds to 88 pounds. I am ashamed to say that my very early initial impulse was to welcome the weight loss. I was certain it would eventually stop, at which point I could eat cookies to gain the weight back. It was a very naive thought that I quickly grew to regret.

When the scale didn’t stop declining, when I grew too thin to fit in my clothes and had to start buying children’s clothes, I began to panic. I was dangerously underweight, and looking in the mirror was scary. My clothes dripped off my body, my eyes and cheeks became sunken, my legs turned bow-like. I had been a daily jogger, but now I slept about 10 to 14 hours a day and I woke only to move from my bed to the couch.

But I didn’t truly realize the gravity of my situation until a chance run-in with an old boss on a busy New York City sidewalk. She looked right at me and didn’t acknowledge me. I stopped her, and when she finally recognized me, she held my elbow lightly, as if she was touching a tiny bird.

I had worn my most conservative dress, trying to cover the bones that protruded from my chest, but still she stared at me in shock as she asked me about my health. Her expression stayed with me long after the “goodbyes” and “take care of yourselfs.” It was the first time I had seen myself through someone else’s eyes.

Losing weight is usually a choice, one we make for different reasons. But to lose weight against your will is something I wouldn’t wish on anyone. I had friends joke that they wished they could catch a virus and lose a few pounds. It made me angry because I knew that they wouldn’t be wishing it if they could feel what I felt. If they could feel the fear, the uncertainty and loss of self-esteem that comes with involuntary weight loss.

Our body weight is more than our physicality; it is the mass that protects and blankets us. Having lost that completely, I felt naked and vulnerable. I was scared.

That said, at one point I hadn’t been so different from my friends who made those jokes. When you aren’t sick, maintaining your weight can feel like a constant battle ― having to choose between the chips at a party versus veggies or going to the gym versus seeing a movie. The idea of losing weight without having to work for it sounds like the easy way out. The real issue is a society where we feel so much pressure to be thin that even being sick to get there seems like a relief. 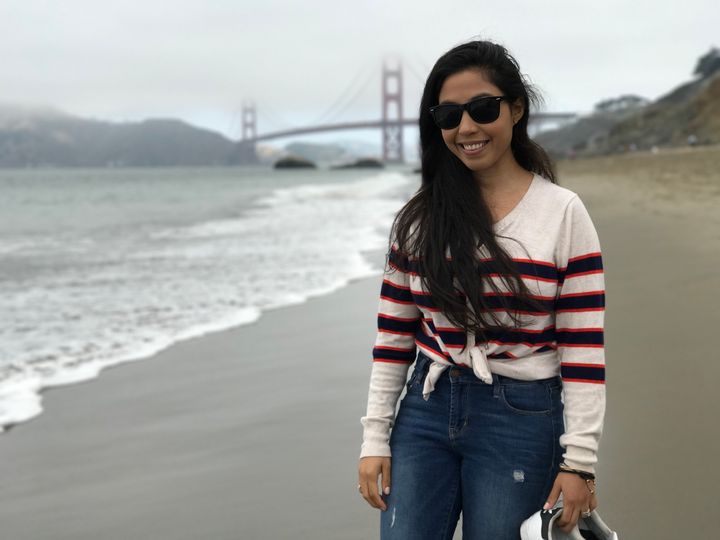 
On my honeymoon last summer, feeling better and back to my normal weight.

Currently, I’m back to weighing a healthy 125 pounds. The SIBO is controlled and the viral IBS is fading. As my body slowly fights off the virus. I am able to introduce and eat more foods.

Now, when my body craves carbs, sugars or salts, I don’t think twice about giving it what it wants. I will go for the organic, local, vegan if I can, but I don’t write anything off as too “unhealthy” anymore. I know what it is like to suddenly not be able to enjoy a bowl of ice cream, to lose the privilege of choice. I am enjoying what I can tolerate instead of putting limitations on myself.

My body is now muscular and fuller from lifting weights instead of doing cardio, which is a little too exhausting still. I can feel myself getting stronger every day, and I am loving it!

I recently ran into an old friend. The last time we’d seen each other, I was at my sickest. Being the blunt person she is, she did not hesitate to comment on my new, curvier self. I was unfazed. Even as she implied I looked fat, I am so happy that I just laughed it off and joked, “You mean I look phat?”

If I could give the me of two years ago some advice, I would say, “Stop working so hard, concentrate on the things and the people you love, and the fact that you are healthy enough to enjoy them.”